Rory O’Sullivan and Shay Kennedy scored in the second period of extra time to give Douglas Hall a just about deserved 3-1 victory over St John Bosco's in the final of the Murphy’s Stout Corinthians Cup at Turner’s Cross last night.

The sides had finished at 1-1 after the ninety minutes and the Hall went on to dominate the twenty minutes of extra time as the Saints began to tire.

Douglas had two decent chances in the first period. In the 104th minute, Rory O’Sullivan turned on a throw ball from the right but was blocked at close quarters. The loose ball fell to strike partner Brendan Crowne but his effort was deflected out for a corner.

There was no reprieve for Bosco's four minutes into the second period. Then O’Sullivan, the Hall's top scorer in the competition, collected a long ball from Rory Browne and controlled it well before shooting low past Noel Murphy to make it 2-1.

It was O’Sullivan's fifth of the cup and he received quite an ovation when he went off a few minutes later to be replaced by veteran striker Martin Davies whose first act was to fire one in that produced a great tip-over save by Murphy.

Murphy though was beaten again in injury time in extra time. Then Davies freed Crowne for a cross that was handled. Midfielder Kennedy took the spotter and took it well to make the final score 3-1.

The opening ninety minutes was evenly contested. The teams didn't create that many chances but there was some good long range shooting and the two goals were excellent efforts.

The Saints put a good move together midway through the opening forty-five. Graham Dennehey quickly returned the clearance from a corner and got Eric Desmond free on the left but his cross eluded the incoming Willie Crowley by inches.

The Hall had a couple of half chances before taking the lead in the 44th minute when Ger McSorley picked up a loose ball at the edge of the box and beat keeper Murphy with a well placed effort.

The Saints had their best period in the third quarter and kept Hall keeper James O’Brien busy and he was beaten by a super 25-yard effort from Ken O'Mahony in the 51st minute.

O'Brien was lucky enough in the 73rd minute. Then Dave Barry’s well placed free from the left touchline had him back-pedalling and he just made enough contact to touch the ball behind for a corner.

Douglas were on top in the final quarter and, in the 75th minute, after a sweeping move, a fine shot by Richard Butler was just over the top.

Five minutes later, Dave Downey passed to sub Brian Stanton on the right. His cross found O’Sullivan at the far post but he couldn't control the ball and ran it wide.

In the 82nd minute, Crowne took possession in the box but, under pressure, shot straight at keeper Murphy. O’Sullivan then forced a corner and came close to getting a header as it came in. Seconds later, Butler had an effort taken off the line.

In injury time, Carroll and O’Sullivan combined to find Crowne in the box but his shot flashed across the face of the goal. Mark Hackett returned it but O’Sullivan headed just over.

O’Sullivan though would have his goal in extra time and it put the Hall on the way to their first ever win in the competition. 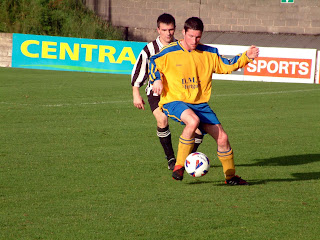 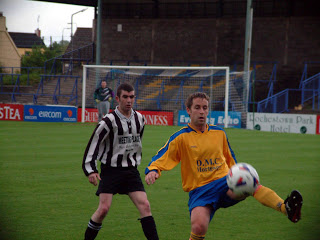