Kinsale edged closer to their second AUL Premiership in successive years with their hard earned 1-0 midweek win away to Grattan United.

In a game remarkable for the outstanding performances of the goalkeepers, Derek McCarthy's 41st minute strike proved enough for the seasiders who will clinch the championship with a game to spare if they beat relegation battling Togher at Clashduv Road on Sunday morning.

A determined Kinsale enjoyed a good start at O’Neill Park and, in the 9th minute, Derek Delea pounced on a header-on by McCarthy and his tremendous 30 yard volley smacked off the cross bar and away to safety and later the ex Leeside player saw a fine effort well saved by Grattan keeper Adam Lynch and, soon after, Lynch again made a top drawer save from Delea.

The goal followed a quick free kick by Peter Jones. He set up Gearoid Cummins to cross from the right and the unmarked McCarthy headed home.

Grattan, still not out of the relegation wood, showed their determination after the break and, early on, John Kelleher found it hard to fathom how his power packed 15 yarder was turned away for a corner by Kinsale keeper David O’Callaghan. Minutes later, Grattan’s Darren Geaney headed wide after a fine delivery by Kelleher.

But Grattan had to be alert at the back and keeper Lynch made a fantastic save from a firm header by McCarthy and then, he came off his line in time to foil Jones who had left two defenders behind him.

While Grattan had the edge in this half, they didn't find to easy to unhinge the Kinsale back four and whenever they did found O’Callaghan blocking the route to goal. 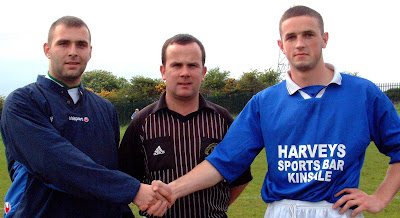