Kinsale v Carrick 08.02.04
Match details below
Please keep sharing and retweeting these pics. And, if you can, let clubs that are not on Facebook or Twitter and those that have folded know about them. Please share these photos on the internet as best you can as a lot of work has gone into them. When sharing individual photos on social media, please credit @CorkBilly on Facebook . Be sure too to download and keep copies for your own club.
FAI JUNIOR CUP

Waterford’s Carrick United were deserving and convincing winners as they advanced into the last eight of the FAI Junior Cup beating Kinsale 2-0 last Sunday at Fort Hill.

They were well organised and strong in all departments and were very dangerous on the break where players like Anthony Power, Thomas Fitzgerald and Daryl Cavanagh showed tremendous skill and guile when in possession going forward. Kinsale failed to get out of the blocks and apart from twenty minutes or so in the first half, it was the visitors that ruled the roost.
Kinsale were finding it very difficult get into the game but Jeremy O’Donovan drove a good effort from 35 yards out narrowly beyond the upright and then player manager Peter Jones saw a good effort flash over the bar. Jones also went close with a free kick and Kinsale’s Steve O’Donovan headed narrowly wide after Brian Barry sliced a clearance.

O'Callaghan would be busy in the second half, starting early with a full stretch tip over to an Alan Ryan free kick from the right and then lucky that a Fitzgerald rocket shaved the outside of his post. Later his defence came to the rescue when Cavanagh beat the keeper to a long ball and lobbed it past him.

But there was nothing he could do about Carrick’s second goal in the 76th minute. He did save Fitzgerald’s initial shot but Daryl Cavanagh pounced and made no mistake. Dave O'Callaghan though was the man of the match and Carrick would have won more convincingly but for the brilliance of the Kinsale goalkeeper. 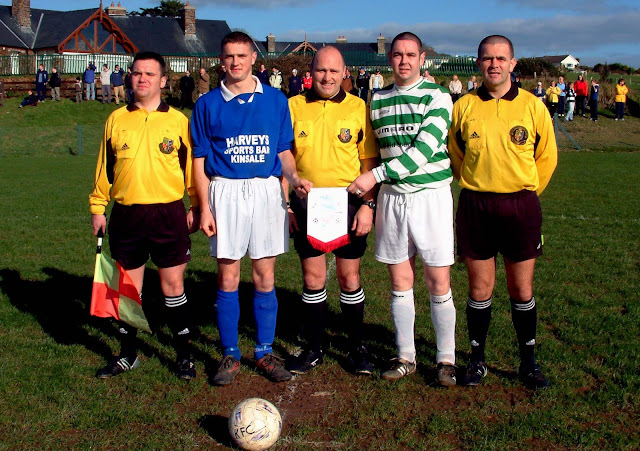