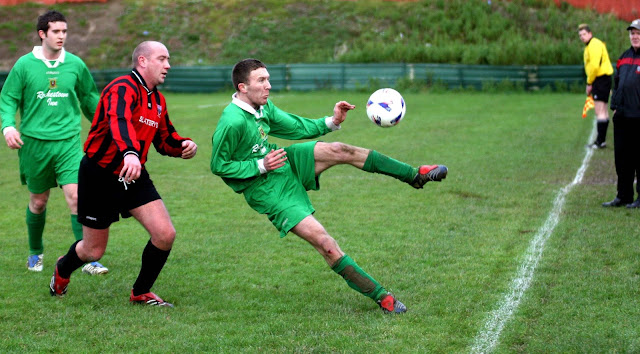 Passage are out of the Statoil FAI Junior Cup and have only themselves to blame for not getting the better of Tipperary visitors Old Bridge at Rockenham on Monday afternoon.

True, Paul Ryan scored a stunning late winner for the visitors but he was aided by defensive errors and slack marking. The harboursiders weren't too hot either at the back when they gifted an early opener to the first division outfit from the Tipperary Southern and District League. 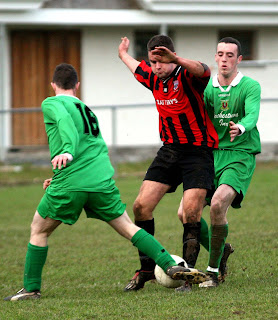 The home side did better in the second half and the experienced Paul Coughlan brought them back into with a gem of his own but they failed to press home their advantage. True, they did have two goals ruled out.

And there was quite a talking point when the second of these goals, by Chris McSweeney, was ruled out by assistant referee John Linehan. 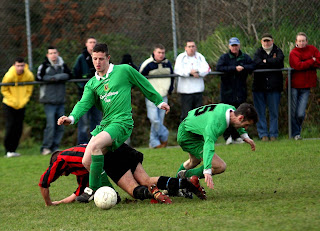 There was really no dispute about the offside flag but Gary Prout, who had taken on a Simon McGarry pass and crossed the ball for McSweeney, had been fouled by full back Niall Kelly just before he crossed but Prout kept his balance and didn't go down. Had he fallen, then referee Damien O’Mahony would have had a big decision to make as the foul seemed to be in the box.

The sloppy Passage defence had yielded up a couple of half chances before the visitors went ahead in the 4th minute. The unmarked Paul Ryan let fly and saw his effort booted off the line by Coughlan but Brendan Ryan pounced on the rebound and drilled it past keeper Daniel O’Leary. 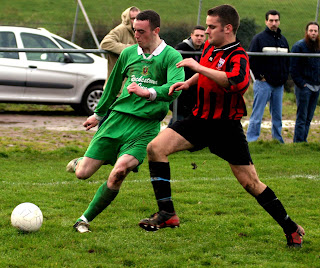 The excellent O'Leary kept Passage in the game midway through the first half. Then a penalty box error by full back Eoghan Lombard deflected a cross into the path of Paul Ryan and his low cross found namesake Brendan but O'Leary dived to his right to make a brilliant save.

The Passage defence came under pressure for the opening ten minutes or so of the second half but this time they held firm and gradually the home team got back into it and there was no big surprise when Coughlan spectacularly volleyed in the 60th minute equaliser off a Gary McCarthy corner. 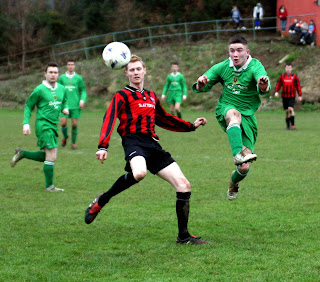 It was all Passage at this point and it looked unlikely that Old Bridge would hold out as the attacks kept coming. Both O’Leary and McSweeney had penalty box shots in the 61st minute but O’Leary’s was blocked and McSweeney’s follow effort was too high.

O'Leary’s quickly taken free kick found the net in the 71st minute but referee O’Mahony ruled it had been taken prior to his sounding the whistle and there was no dispute about that. McSweeney’s disallowed effort soon followed as Passage piled on the pressure. 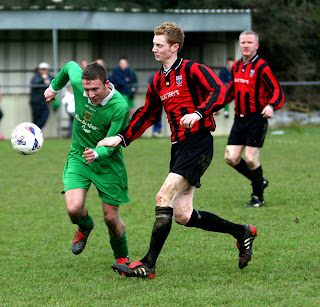 Prout then had two decent efforts, one off the angle of bar and post, as the search for the elusive winning goal intensified. But the winner was to come - out of the blue and at the other end.

In the 87th minute, the home defence gave away a throw in on their right and then compounded the error by not picking Paul Ryan up as the ball came in. 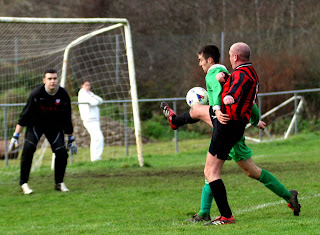 He made the best of the unexpected space and, from 25 yards or so, unloaded a powerful shot that flew high into the top corner and propelled Old Bridge into the sixth round.