Bohane set up the two goals by which Lakewood led at the break and was involved again when they scored a late second half clincher.

Rangers had pulled it back to 2-1 midway through the second half with a goal from a disputed penalty. The encouragement provided by the goal and the later sending off of a Lakewood defender raised hopes that the losers would repeat their dramatic 4-3 come from behind win over the Ovens team in their recent Munster Junior Cup game. They were also two down on that occasion but Lakewood had learned their lesson and quickly slammed the door.

Bohane came ever so close to crowning his five star show with a goal in the closing minutes. In the 84th minute, he raced onto a poor back pass but saw his shot come back from Walker’s right hand post. Two minutes later, Bohane took charge at a free kick but this time his 22-yard effort hit the other post.

It was far from a one man show at the home side's magnificent pitch in Ovens. Keeper Donnacha Murphy was in excellent form as was Bryan Kelly immediately in front of him and they were also impressive upfront where Rob O’Shea, Joe Kelleher and Gary Lucey all stood out.

Lakewood had the early chances. In the 7th minute, Ciaran O’Sullivan played dangerous centre-forward Rob O’Shea through but alert keeper Arthur Walker was the edge of his box to save at close range. Walker had similarly denied the quick-breaking Gary Lucey a few minutes earlier.

In the 13th minute, following more pressure, Lakewood’s Paul Courtney got Bohane in behind the defence but his shot was over the top.

Lee and O’Connell did their best to set up chances for the losers. Lee’s 15th minute free found Barry O’Callaghan coming in at the far post but the header was well saved, at the expense of a corner, by home keeper Donnacha Murphy. 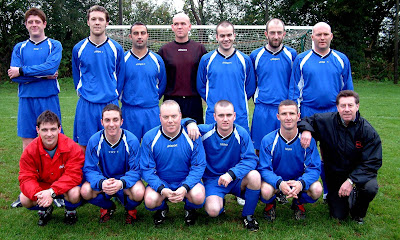 Lakewood should really have taken the lead in the 21st minute. Then O’Shea and fellow striker Joe Kelleher combined and played Gary Lucey free but his finish was poor.

Rangers were exposed again two minutes later, this time by a poor back-header from defender Murty Holland. Keeper Walker seemed in trouble but he got there just ahead of O’Shea.

Walker and his defence were now coming under severe pressure and were lucky in the 29th minute. Then O’Shea found Kelleher with his back to goal; Kelleher rather easily beat his marker. Keeper Walker went to ground a little too quickly but Kelleher’s low drive went across the goal and just wide.

Lakewood put a classy move together in the next minute. O’Shea and Kelleher were again involved in setting up Lucey for a cross from the left but the return to the incoming Kelleher was a shade too high and he just failed to connect at the far post.

Rangers weren't showing much as an attacking force in this period but they came close to a shock lead in the 40th minute. O’Connell’s smart 20 yard shot on the turn was very well saved at the foot of the post by keeper Murphy.

Lakewood got the goal they deserved in the next minute. Outstanding midfielder Bohane put O’Shea away and he held off his marker before beating Walker with a low drive to the far corner.

They almost doubled their advantage in the 42nd minute. Full back Trevor Morrissey started the move with a fine ball forward to Kelleher. He found Lucey coming in but his penalty shot strike was a shade too high.

Lucey should have scored that one but he made amends in first half injury time. A brilliant Bohane cross from the right hand touchline gave him the chance and, unmarked, he guided the ball home from close range.

O’Shea had two efforts to extend the Lakewood lead in the third quarter. In the 59th minute, he was just off the mark with a quickly hit low drive after a cross by Brian O’Sullivan had broken loose and, in the next minute, went close with a  header from a cross by Courtney.

Rangers got one back in the 68th minute when Ray O’Connell scored from the spot after Bryan Kelly was adjudged to have handled his shot.

There was bad news for Lakewood when full back Courtney picked up his second yellow card in the 73rd minute but any worries were eased in the 79th when O’Shea and that man Bohane combined for Ian O’Mahony to make it 4-1.

Rangers snatched a consolation with less than two minutes to go when Barry O’Callaghan took advantage of a defensive error to shoot low past keeper Murphy’s left hand and into the corner.