Tony Fitzgerald. The new president of the FAI.

TONY FITZGERALD (His football story up to Dec 2000)
Tony continued his football work at local, provincial and national level,
and last weekend, was elected President of the FAI. 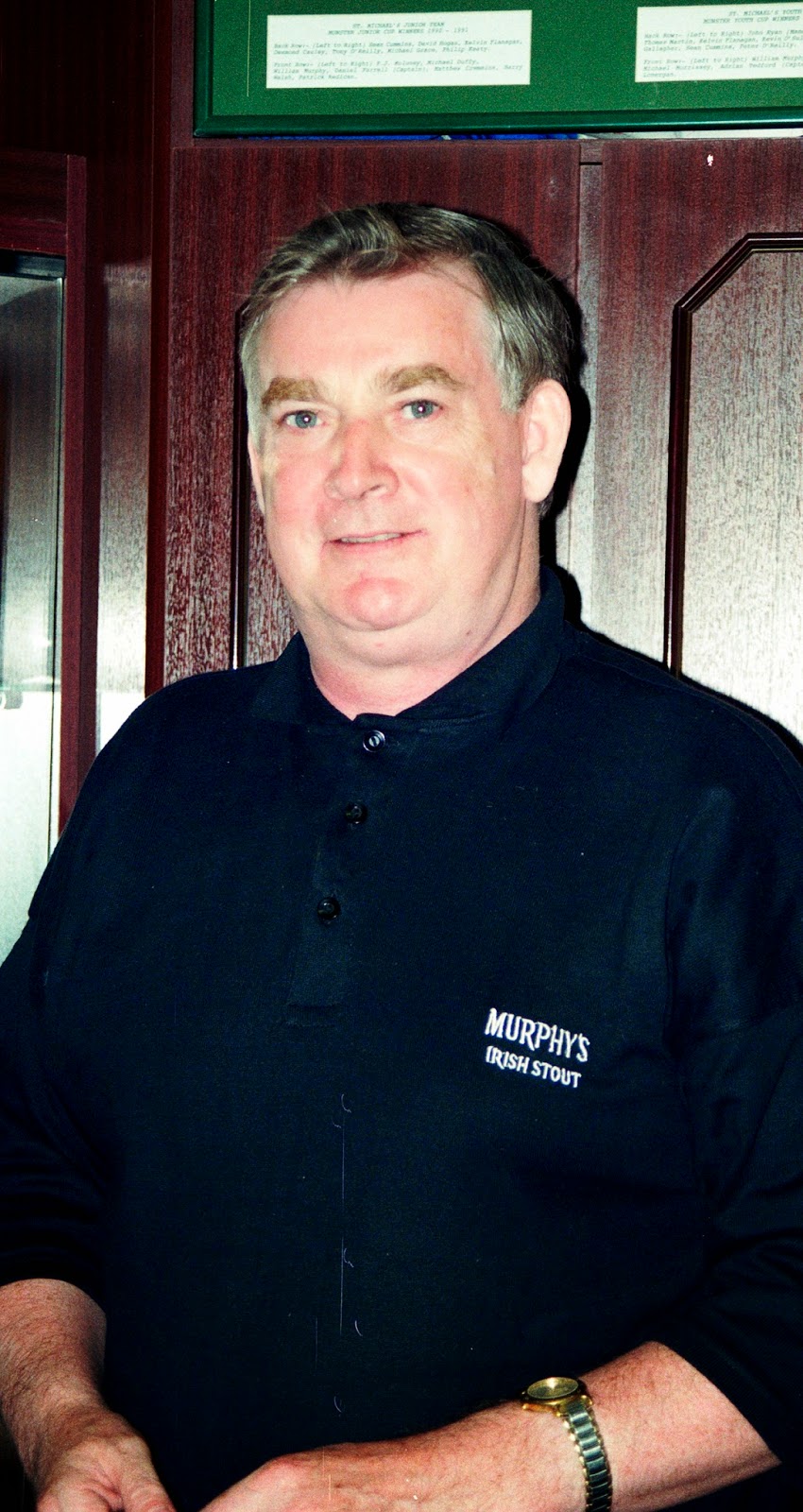 His FAI appointment, the most recent, came at the first meeting of the council in September but he had been a member of this body for much longer.  The highlight in recent years was the EUFA Under 18 Finals triumph in 1998 and Tony was in Cyprus as the boys in green beat Germany in the decider.

Fitzgerald has a high regard for youth coach Brian Kerr: "He is an excellent coach.  He is a great man to suss out the opposition and video studies of opposition games are one of his strengths.  I have great time for him."

The setting up, over the past twelve months or so, of Regional Directors of Coaching is seen as a big step forward by Fitzgerald though he cautions that it will take some time to bear fruit.  Fitzgerald is strongly of the opinion that all managers of underage teams should have coaching qualifications: "This is essential for the proper development of football."

Tony, who has already been in France, the Czech Republic, and Germany, with Kerr's youth teams, since his appointment, would dearly love to see the Irish again qualify for the EUFA finals, preferably before his two year term is up.

It was in Waterford last June that Tony began his two-year term as chairman of the MFA, following in the footsteps of other AUL members including John Barnes, Mossie Linnane, Vince Cummins, Paddy Barry, and John O'Sullivan.

Fitzgerald, not surprisingly, is delighted with the improvements in Turner's Cross over recent years under the aegis of the MFA: "It is a great boost.  The development work is ongoing and progress to date has been very good.  I look forward to seeing it completed".

Fitzgerald says that the Cross, once completed, will compare with anything in the country and he will be doing his bit to get competitive internationals, more likely at U18 or U21 level, at the venue and not just friendless.

His main ambition is to see facilities improve right across province, while acknowledging the improvements that have taken place over the last decade or so: "The clubs involved are to be congratulated, great credit is due to them," said the chairman as he went on to contrast the scene today with the lack of facilities when he started in the game.

He was elected to the AUL chair back in 1994 and his term here is open-ended.  He is happy that teams from the league reached the closing stages of the FAI Youth and U17 Cups in recent seasons and the current inter-league youths side are still going strong in the championship.

Again he praised the clubs, from both city and county, who have developed grounds and facilities in the recent past.  He would also like to see an AUL junior side go on and win that elusive FAI Junior Cup.  "Even if they get to the semi-finals, they will qualify for the FAI Senior Cup and they should go for it.  In recent seasons, junior sides, such as Fairview (Limerick) and St Michael's (Tipperary South) have done the junior ranks proud in open competitions."

No matter which hat he wears, Fitzy is a big supporter of Eircom Park: "Eircom Park is a must as far as I am concerned but I am disappointed by the short-sightedness of some legislators, particularly at National League level, who are looking at short term gain."

Chairman on the treble or not, Fitzgerald was quick to point out the valuable work of committees at all levels of football, men and women who do tremendous work, from schoolboys up, with very little by way of public acknowledgement though the AUL sponsored Cork Soccer Honours are now doing something to honour the voluntary work going on in football.

Tony first took to the football stage as a tiny tot mascot back in the late forties.  That initiation came at Turner's Cross when Rock Rangers, of which his late father Thad was secretary, successfully contested the final of the Munster Junior Cup.

Tony went to Sullivan's Quay CBS where hurling and gaelic football were on the
menu.  As soccer was more to his taste, he was frequently in trouble with the
Christians Brothers.

His first chance to play organised soccer came in the Ballyphehane Street
Leagues where he captained Upper Connolly Road and then went on to play in the
Schoolboys League with Ballyphehane City despite approaches from Tower Rovers
and Glasheen, the glamour underage teams of the period. As a schoolboy, he
played a few AUL games for the club's junior team.

Ballyphehane City went out of football and he joined a newly formed team
called Blues United.  He played minor with them and, making his bow as an
administrator, was on the committee running the schoolboys section and was
Hon. Sec. of that section when one of their players, Timmy Murphy, was capped
at Under 15 level.

Then that Junior League went out of existence, the committee and players
decided to enter a team in the Munster Senior League.  Success followed.  They
won the Senior Shield, qualified for various cup finals, and qualified for the
1st round of the FAI Senior Cup in 1967.

At that time, just four intermediate teams could qualify for the senior
competition and Bridewell got through by virtue of a stirring win over a great
Cobh Ramblers team in the quarter-finals of the FAI Intermediate Cup.

Bridewell were drawn away to League of Ireland side Drogheda.  Fitzy recalls:
"We were very apprehensive about the game.  But on the day we excelled and
Drogheda were lucky to get away with a 1 - 1 draw.  I remember Ronnie Whelan
(father of Ronnie of Liverpool and Ireland fame), scored the equaliser for
Drogheda".

Fitzy himself was up against the famous Jimmy Hasty, the one armed player well
known to Mardyke regulars.  Hasty was a delightful player but Tony marked him so well that Hasty was dropped for the replay.

The replay went Drogheda's way and they advanced on a 3 - 0 scoreline.  The game was played in Turner's Cross but so bad were the ground and weather conditions that many thought the game should not have gone ahead.

The Bridewell players had to pay three pounds for that away trip.   And
Fitzgerald remembers:  "The cost included the return coach journey, B. & B. in
a top class hotel in Lucan, Co. Dublin, and an evening meal on the Sunday
after the game."

He first became involved with the AUL in the mid seventies when the late Christy
McGrath proposed him as a selector of the Oscar Traynor Cup team.  Soon he was
co-opted onto the management committee and filled the role of fixtures
secretary for many years.

His administrative skills have long been noted outside the Cork area and in 1994, he played a leading role in helping the FAI stage the European Under 16
Tournament Finals.  Tony was chairman of the Munster area organising
committee, a role he filled with distinction. 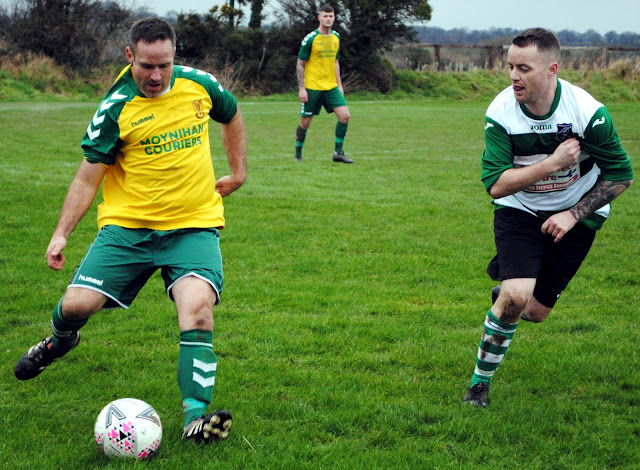 Hibs' Senan Andrews gets his clearance away despite the close attention of Glenthorn Celtic B's Timmy Kelly in the Saxone Cup semi-final action at Shanbally on Saturday. Hibs won 3-1.