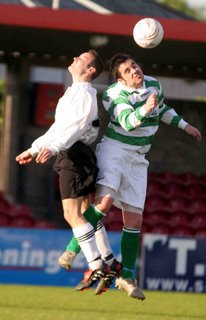 Keeper Greg Byrne scored one and saved one as Springfield won the Murphy’s Stout County Cup for the first time ever when they defeated first division rivals Ballincollig 4-3 on spotters after last evening’s final at Turner’s Cross had ended without a goal.